Mazie’s at Song School in Lyons, Colorado. I’m working at the Stone Cup as a sandy blond lady adjusts the paintings hanging beside me. It turns out it’s Sally White King, the artist. I tell her that I like her bear pictures. Also how she decapitated the female heads in her portraits of the Mother and Child.

When the morning starts with something like that, it’s time to close up shop. You basically have gotten enough for the day.

There are over 400 Black Madonnas (or Black Virgins) throughout Europe, some dating back to the twelfth century. Aside from the black coloring, some of them have two things in common.

The Madonna holds an egg or an apple (both representing either fertility, worldly knowledge, or sexual corruption). And plaited red hair or vestments. 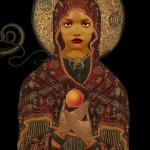 We may never know the true story of the historical Mary of Magdala, the anointed companion of Christ. She most likely was not a prostitute (the New Testament scripture does not clearly support this), but no matter. For much of the 2000 year Christian narrative (and officially since Pope Gregory in the year 591), poor Mary has been identified as a harlot, the fallen one allied with wayward women.

The belief left behind a two thousand year long trail of religious images and iconography.

Mary of the curling hair, identifying her as an adulteress.  Mary being cast into the wilderness.

Mary, her red hair flowing down her back, kneeling at the foot of the Cross. Mary present as Christ is laid within the tomb.

But these images also suggest another Mary, that of St. Mary Magdalene, the one who proclaimed to the world that Christ had Risen.This Mary lies prostrate before the empty tomb. This Mary heralds the birth of Christianity itself, becoming the Apostle to the Apostles.

St. Mary Magdalene is also the patron saint of penitents and perfumers,or to put it another way, the guardian of the fallen and those who anoint in anticipation of sex.

This Mary is alluring.

She contemplates and is illumined by the burning flame of god.

This is the Mary of the Cave, more voluptuous and sexual than repentant. Her flowing red hair suggests the flow of blood.

This Mary is the one cloaked in red. She is the one to present the red egg to Caesar. This Mary gives Word (or birth) to the resurrected Christ.

But we sometimes use metaphor to give greater dimension to the literal.

What if Mary was confidant and companion to Christ in the fullest sense? What if this laying in and exiting of the tomb was of a different, more carnal sort?

Mary of Magdala carries within her the blood of Christ on the eve of his death. Mary is the Chalice. She is the generative vessel. That’s why Sally sliced the heads in half.

The Black Madonna is the Holy Grail itself.

And that’s why Arthur and his knights (and later Terry Gilliam and his band of buffoons, swallows and coconuts aside) were never able to find the damn thing.

The Chalice was in fact the feminine counterpart to Christ (and the sexual drive) that had been surgically expurgated from the religion. Sex had been cloaked in the blackness of sin. And if the procreative impulse is made unholy, where does that leave us?

It gets even weirder. In the Middle Ages, to protect their daughters’ virtue from marauding soldier or to pawn off the spinster daughter, they would pack them off to nunneries. With the true Bride of Christ now gone, these young acolytes would seal themselves to the Son of God by taking vows of chastity. The sexual impulse would become sublimated and would in turn find expression only through religious ecstasy. The nuns would at times feel within their wombs the fire of Christ.

But what if we were to once again acknowledge the Black Maria, no longer painted black, but as the woman who perfumed and bathed the feet of the Lord and gave issue to the Fruit of Heaven? Hinduism, Paganism, Zoroastrianism, Puebloan and Mesoamerican cosmology to name a few, all make room for the procreative force. By making christ a celibate, we neuter a fundamental aspect of the human experience. Perhaps that’s why many of the firefights in contemporary christianity have to do with sexuality.

Who’s to say which narratives should be designated as apocrypha, and which canon? And as we evolve, will other narratives become more resonant?

Oh and by the way. Tom Wait’s Black Mariah? It’s slang for a paddy wagon hauling away the condemned. And also, perhaps most beautifully, the nickname given to a black tarpaulin shack built by Thomas Edison in Orange, New Jersey.

That misshapen building? It was the first Movie Studio in America.

Or, you might say, the womb of our contemporary imagination and desire.

The first thing she learned as a three year old violinist was how to bow. From that first gesture all things commence.

For most of yesterday, I holed up in the Stone Cup coffee house excepting a break to go back to camp and eat lunch with Mazie and listen to her sing a song she had written that morning about her song writing partner. In turn, her partner was supposed to write a song based on stories Mazie had told her. I asked her what she had talked about and Mazie wouldn’t tell because she “didn’t like me and didn’t want to share her stories.” Which is what, I think, this time is all about. After sharing lunch, she lamented that she wanted to connect with some other people, but didn’t quite know how to do it. I listened and made some feeble suggestions and then she was off, making as many tracks away from me as she could.

There’s the doing. And then there’s the allowing. The doing is the driving and periodic suggesting and the working and the paying for. And the allowing is the stepping back and letting her discover the person she is meant to be. Both, in their own ways, will go unrecognized. This morning after walking away, i caught sight of her writing in her songbook in the tent. And all yesterday and this morning she recognized people from Telluride and parts known and unknown. And I realized that our daughter was finally stepping out on her own.

We need to help her stand independently. But the sentiment immediately collapses in on itself. How do you help someone be independent?   We have to not help.  Instead we need to walk away.

So for the week, I’m her on call mule. If she needs an assist, I’m there for her.  But she knows what she needs to do.  And where she needs to go.  And it’s time to go.  And it will mostly be without either of her parents.  And, by definition, the very best parts of it neither of us will be there to witness.

Late on our first evening, she asked me what I wanted to do. After the long drive,  all I wanted was to pop some benadryl and go off to bed.  I told her as much.  But if there’s something else you want to do, I said, I’ll do it.  Well maybe I’ll just go to bed, she whispered. But then she hesitated, turned, walked over to a circle of musicians and pulled up a chair.  I followed. They asked if she wanted to play and she took the guitar and played a Patti Griffith song. She then left and returned with her violin.

A fellow asked if she could accompany him on a song . What would she like? he asked.

Something slow, she said.

It doesn’t matter, she said. The fellow started to play, and within half a bar Mazie had  raised the violin to her chin. And then she fell in and let her instrument sing in a sweet and aching way. He sang and turned to her and the violin carried on, bearing the song in new directions and then back around so that he could carry it again. And like that they travelled for quite a while.  Folks sat, intrigued it seemed, and strangely moved.

How long have you been playing with your dad, another musician asked as they finished.

He’s not my dad, Mazie announced. I’ve never seen this girl before in my life, the song writer said.