People gathering near the cathedral in August 1944 after Allied forces recaptured Paris.

Why does the burning of Our Lady affect me so?

I’m not a practicing Catholic or even a Christian really.  So why should this conflagration matter?

Although I am not of Christian faith, Christian tropes do apply here.

The Notre Dame Cathedral was designed in the form of a cross, and the bell towers stand at the position of Christ’s feet when he was brutally nailed to that Tree of Life.

The spire once rose directly above the center of the architectural crucifix – that ashen vehicle of sacrifice – and when the spire burned and fell, it pierced the nave like a spear piercing the heart, not of Christ, but of the Christ.

And like the original crucifixion was so intended, this sacrifice may perhaps have shaken us again from a slumber.

When the great teacher and expositor of belief Joseph Campbell was once asked where he prayed, he answered simply, “Notre Dame,”  Our Lady.   Even if he had not been there in years, he explained, her profound space was still his spiritual home.

But the sorrow over her burning is not about denomination. Nor is it necessarily about Christianity or Islam or any other belief system.  The burning matters not so much because it is even a religious thing.

It matters because it is a human thing.

It matters because for many it was a place of secular pilgrimage.  How many of us have taken pictures of ourselves with family or a fiancé there among the gargoyles and demons, as if to say, we one day will die, but here, if just for a moment, we once lived and we once loved.

It matters because Notre Dame is the symbolic center of France (and you could even argue modern Europe and in general the West) – Ground Zero if you will – from which all distances are measured.

And the center – in a time in which the center struggles to hold – matters.

In his recent book, The Road to Unfreedom, Yale historian Timothy Snyder documents how in a highly calculated way foreign actors have worked to undermine political and social cohesion in the United States and in Europe.  A third of Brexit twitter posts were generated by bots as part of a covert Russian media and troll campaign.  The same forces have launched sophisticated social media campaigns in the Ukraine, Hungary, Poland, France, and the US intended to invalidate liberal democracies. Deliberate untruths foment social divisions, including the Yellow Vest movement that has torn apart Paris.

But this is not just about one nation’s imperatives pitted against another.  It concerns an assault on truth itself.  We are being incited to let ourselves be governed by emotion and impulse, by vague belief in what we wish to be true and not in facts themselves.

As our fears are stoked, the spectres of authoritarian governments have risen across Europe and within the United States. Authoritarian leaders do not necessarily seize power.  Afraid, we willingly give it up.

In this strange world, fact and truth are denigrated. Chaos becomes the brand, disintegration the goal.  By turning us against each other, more can be accomplished than through a multitude of guns.

As our passions become inflamed, the centre cannot hold.

And without a moral or spiritual or truth-bound center, unhealthy impulses grow to fill the void. We frame anyone beyond our immediate tribe as outsiders to be either vilified or feared or destroyed. We turn our selves away from one other.

It took 183 years to build Notre Dame, slightly less time than the United States itself has even existed.  Our Lady represents the greatest of human endeavors – that painstaking and collaborative work that contributes in some small way to a great edifice beyond our own cognition.  Something so vast in conception that in Our Lady’s first construction, neither the first stone masons nor their children nor their grandchildren would ever live to see her completion.

She is about honoring something greater than one’s self.

Call it the perfection of democracy.  Or human emancipation, or equality, or the extension of universal rights to all forms of life, or the prevailing of truth over momentary whim or lies or fancy.

So, strangely then, her burning may now promote a different kind of faith.  Not necessarily in God, but perhaps in us.  Not the us vs. them, but the very center that is simply the collective and embracing us.

For decades the foundation dedicated to preserving Notre Dame struggled to raise funds.  But in the hours after the fires were extinguished, more than 600 million euros poured in from donations both quite large and incomparably small.  We donate because, perhaps, we’ve been awakened to the thought that the center must indeed hold.

Her burning matters because it reminds us of the profound need to come together in a time when individuals and forces are doing all that they can to drive us apart. 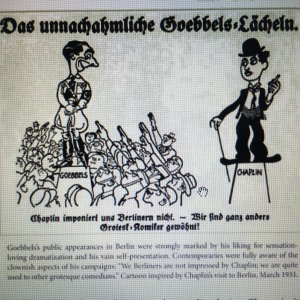 A reminder on the cusp of a perhaps grave and auspicious day.

85 years ago, they were a silly and disregarded minority.  People chuckled at the circus antics, the self-infatuation, narcissism, and obscenely transparent self-glorification.

The beset people who first joined on to the Nationalsozialistische Deutsche Arbeiterpartei (NSDAP) believed in a united country, promotion of nativist values, and the expulsion of minority populations who posed a perceived threat.

But for years, the vast majority of the country paid little attention.  Initially these small crowds of cheering admirers were nobodies.  Routinely arrested for civic disturbances, laughed at for their absurd fanaticism, they would amount to nothing.  And then Goebbels discovered that spectacles and calls to violence brought them attention.  And the attention brought them more crowds.  And the crowds brought them power.

And then one day, that silly minority became a grudging, then an accepting, and then an excited plurality.  More respectable ones joined because it would help them get what they wanted. And it would help them retain power.  They couldn’t stop it. And so they joined it.

And then no one was laughing any more.

I posted this picture last night and had to take it down. At midnight we started getting calls from drivers who thought they saw me.

Yesterday traffic was at a standstill on I-70. We were stuck in a narrow canyon in an endless line of cars beside the raging Colorado. I told Anna I could walk out of there faster.

Which I did. Which meant I hiked 6 miles out of the White River Wilderness area. On a freeway.  And with a little help in the end.

Anna and Mazie found me three hours later in the Glenwood Springs brewpub nursing a rootbeer.

A biological system that takes more than it needs is dead. By definition it is deadness. It is cancer.

What is this thing that we have created? We relentlessly mine the earth for everything we can. Taking taking taking. Mine, mine, mine. Then we dam the rivers, not to harness, but to steal the life energy of the water. Dam the river. Kill the water.

This is what we’ve become. Mine, mine, mine. Damn, damn, damn.

Zero is where the fun starts. Everything else is too much counting.

Midway through Skateistan.  Power blows.  And the screening turned into an improvised conversation about the valley floor, Mountain Film, and social action until someone broke out a fiddle.

This is the only film festival I know of that actually doesn’t need any movies. 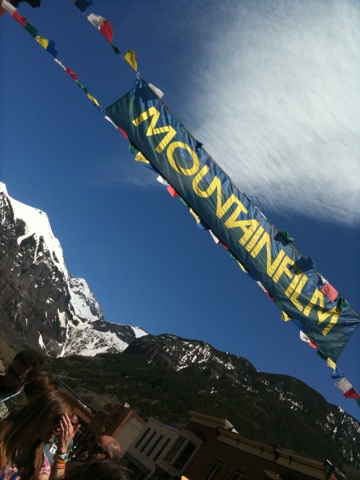 I’m in Hotevilla when the call comes.  There’s a propane leak at Hopi Health Care and they’ve evacuated the facility and the adjacent housing complex.  They’re afraid the whole thing is going to blow.

I drive back to First Mesa.  The hospital and housing entrances are blocked by a phalanx of squad cars.  Two fire trucks wait on the side of the road about a mile distant.  I drive past, hook a right on the airport road and park on the cracked asphalt adjacent to the air strip.  I secretly cut across the wash and desert to the rear of our house and hop the fence.

Inside, I settle down with a ham sandwich.  The neighborhood feels ghostly and empty. What do I take? I wonder. I finish my sandwich and grab my laptop and Mazie’s violin.  I load a duffle with some meat from the cow we slaughtered.  A half bottle of Hornitos.  I shoot a quick video of each room of our house (for insurance purposes).

I plop my Mennonite hat on my head and wrap my scarf around my neck.  I move the chicks outside.  I open the gate and our dog Mango steps out with me.  We’re joined by the stray pit that everyone dislikes and together – the dogs and me, violin and duffle in hand, set off across the desert. A sand storm kicks up, sending tumbleweeds skittering past.  A thunderstorm approaches.

Perhaps this is how it ends.  Behind me I’ll hear an explosion and feel the heat of an enormous fire ball.  Anna’s work and all of our worldly possessions will have blown up.  And then we’ll climb in the car with Mazie and drive west.

Blowing again.  Wind chimes newly hung have been ripped to the ground.  The one remaining from Arcosanti peals all night like a ball-peen on the skull.  The wind brings moisture but sooted with a thick cloud of orange dust.  The dust settles on everything inside, outside; it lodges in your teeth, your hair.

I’ve loved this wind because it chastens.  If it were just the wind, that alone would be enough.  But what when the whole world brings you to bow?

Last night I asked my friend Al how life was.