Today I gave a doll to Dr. Quivey, the radiation oncologist managing my care. When I first told my daughter her name, she laughed and asked how I could possibly have a doctor named Quivey. Kwivi in Hopi translates to “particular” or “detail-oriented” or fussy. My Hopi friends concurred, though, that when it comes to a rad onc doc, this is probably a good thing.

The doll I gave her represents Dawa, the sun, but represents more deeply the radiant energy that not only grants us life, but has the power to take it away as well.

He looks nice. I’ve been looking at him for years now, but cannot at all profess to understand what he really means. But I do know what I see. I see rays represented by feathers – which in Hopi cosmology are also the vessel and vehicle for prayers. Eagle down is symbolically conflated with moisture and smoke and the seminal force that through intent is transmuted into life.

And I see that his mouth – the source of breath and utterance – is also represented by a prayer feather. The lower portion of his face is blue, the water world – the subterranean from which all life emerges. The upper is composed of the two halves of the celestial vault and the cyclical waxing and waning of energy and life that occurs each day and in each year and in the course of all of our lives. The beaded horizontal line appears to be where we are – the thin material and terrestrial plane in which we exist for a moment. And the vertical bead suggests the channel by which we emerge from one world to the next. It’s the birth canal and the point of exit when we die. And if we live right, it’s the gradual and wonderful process of unfolding as the world reveals itself over time.

I feel grateful to my doctor and (hopefully limited) executioner. I wouldn’t want it any other way. 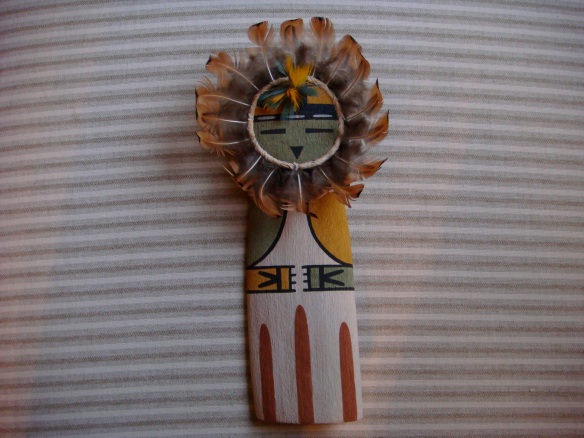