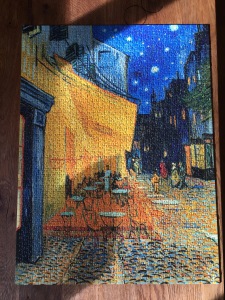 In my imagined heaven (unlike the fundamentalist heaven muddled in moral condemnation) van Gogh, along with Rothko and Francis Bacon, while away the mornings appreciating and talking about color.

But for now you’re not yet in heaven.

Instead it’s a warm September evening in 1888.  You still sit on a stool in the Place to Forum glancing to the south down the Rue de Palais in the town of Arles.  Your paint brush dips all over that lead and chromium palette.  The constellations of Perseus and Andromeda shimmer in the sky wedged above the narrow alley: although you capture them imperfectly, some life forms long extinct once unknowingly cast their own eyes toward your future visage that would receive them.

As for us, you remain anchored in a world of substance while I hover in the immaterial world that has not yet come to be.  The street is filled with ghosts, future and past and present, and perhaps you find our presence claustrophobic.  The film between us remains impermeable.  We will never touch.

A blue cloaked waiter ferries glasses of Lillet.  A woman cloaked in a thin coat crosses the street with her husband. None of them pay any heed to you. You’re nearly as invisible as I.  But if not for you, their even now scant mark on history would be lost forever. If they’d known, they might have interceded or perhaps offered corrections.

But the crowd thins until it is just you and I. You are tired.  You will be dead within a year.  And people will champion you and fight over you for a very very long time.  You will ignite passion and fury much like the first wandering preacher.  But if the truth be, I wouldn’t even be here with you on this night but for that odd portal you created with a bit of oil and pigment brushed on to a tightly stretched piece of fabric. Tired yet exultant, you pack up your oils in a wooden box and set to walk home.  You carry a canvas, the paint still sticky and wet.  I follow.  You can’t see me and you never will.

All the same, I would just like you to know.