Two nights ago, I lay awake at 2 am listening to the howling wind. It was hot and dry, and blowing at night no less. Usually the winds die down by dusk. Even more importantly, this stuff is supposed to be done with by the middle of May. This year, we’re coming up on July and the wind is still blowing relentlessly.

If this is just an abnormal year, that’s totally fine. Abnormal means we have a normal to return to. Some year’s it’s hot. Some it’s cool. In the end it all works out. But if this (or something like it) is the new normal, I believe we may be in trouble. Here, unless you’re really good you can’t successfully dry farm under these conditions.

Dry farmers in this part of the Plateau depend on the pulse of moisture that arrives in January and February. If you’re lucky it soaks in and permeates deep layers of clay. If you’re even more lucky, you get a light pulse of rain in April or May that will jump start the seeds when you put them in. Even when the winds hit in May, the corns are well enough adapted to withstand it.

Or rather, they can if it comes upon them slowly. Technically speaking, dry land farming is, in part, about applying gradual selective pressure to seed stock so that over time it can evolve to withstand extreme environmental conditions. But that’s not what’s going on. Last year, the winds quit at the beginning of June. Now it’s four weeks later. Plants may not be able to adapt quickly enough.

If this is the first sign of our agriculture being suddenly bludgeoned to death, we can’t stand on the sidelines. Now’s the time to jump onto the playing field. Why? Because extreme conditions breed extreme diversity. You see it in edge ecologies – biomes that exist on the edge of a stable ecosystem evolve much more quickly with far stranger and exotic and powerful results.

This morning I was out hoeing and I caught sight of my Hopi neighbor watering his corn. It’s pretty much a daily routine for him, almost to the point where you might as well consider it aquaculture. I have to hand it to him, though. One, he’s farming. A lot of people are not. Two, he cares enough to keep his stuff alive at all cost. Three, he’s been maniacal about keeping his yard clear of ragweed and Russian thistle (which few people do around here). I’m highly allergic to both and his house is upwind of mine, so he’s graciously saving me from a huge autumn headache.

We’re growing for completely different things, though. He’s growing for corn. I, on the hand, am growing for resilience and strength. I don’t need a hundred ears. I just need few. In general, I’m not watering. On the worst wind days I’ve applied a cup or two of water just to keep a few of the plants alive. I don’t even necessarily want to keep them all alive, just the strongest. Let the environment dish out everything that it can. The few plants that survive, why, they’ll be the ones. I want something capable of a deep taproot and extreme resilience in the face of catastrophic wind. Overall, this kind of farming/gardening is a terrifying tightrope to balance.

Hopi corns are very smart. Smarter even than a lot of people I know. It figures out conditions quickly and responds physically just as fast. But even so, I fear the conditions may be changing even faster. I need to goose my plants just enough for them to stay alive, but not too much to drive them out of the race.

In the face of a looming disaster, our human lives may depend on it. 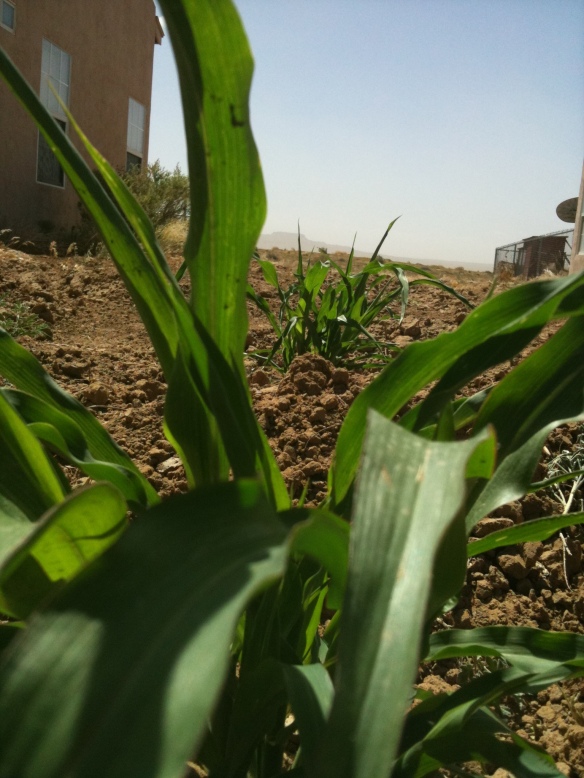