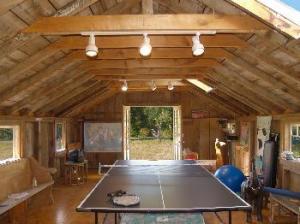 In 2000, Peter and Andrea Regan bought a home on Sparkes Road in Sebastopol California. Neighbors say the dilapidated farmhouse was not much to look at. Cramped and claustrophobic, the Regans gutted the place and tripled it in size.

And then, there was the matter of the falling down chicken coop. Built of milled ship timbers, or perhaps from trees hauled out of the Mendocino or Stumptown woods, it hadn’t held chickens in years and was destined to be torn down.

But Peter Regan, through some infusion of resource and energy, did more than keep it alive.  He shored it up on new footings.  He had it reclad in recovered boards.  He added skylights and track lighting and a honey colored floor.  It became a playroom, a ping pong room, a secret retreat for his three growing daughters.

The natural tendency is for things to degrade until they become dust.  But what of the counterposing force?  That thing that creates and is being, well, it’s life itself.  And to foster life where there should very well be none at all – why that’s heroic.

It sounds so simple.

But what really occurs in that strange alchemy that we pass off as resurrection?