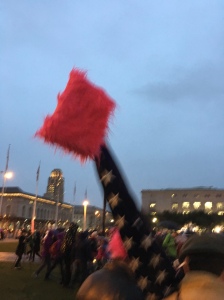 As broadcast on KQED.

On Saturday, Market Street overflowed with more than a hundred thousand undaunted people. That night, one thing above all became abundantly clear.

Both civil and profane, the sound encompassed both the lady’s diction and the withering honesty of the nasty woman. Yet it was far more than that. Around the country the air carried the voice of a manifold population gathered from all manner of lived experience.

In 1883 the poet Emma Lazarus wrote the words now inscribed in New York Harbor, describing that New Colossus. She towers not like a brazen giant, but “a mighty woman whose flame is imprisoned lightening, and her name, the Mother of Exiles.”

We also know her as Liberty.

She shrinks neither from fear nor the immensity of her challenge.

Send these, the tempest-tost to me, she asks. And she embraces them with a mother’s arm. This act that might speak of weakness becomes our greatest strength and reveals a moral wealth that casts shame on any gilded tower.

It rests in the belief that there can exist a nation able to accommodate all manner of creed and idea. In this way, the many, so different, can become a resolute and indivisible One.