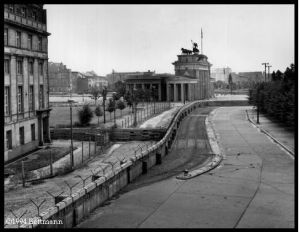 Before the Wall fell, Anna and I once took a train across East Germany and Poland from Berlin to Moscow. But to get on that train, we needed first to get past a Dutch-German Intourist agent, Hendrik Grave who, it seemed, was the only one who could book us a berth, but in Berlin something went terribly wrong, the reservations were not complete, the seats unavailable. We would have to delay. But no problem. We would stay with Hendrik, he said. But instead he put us up in a friend’s flat, but that friend stole our luggage and so we were forced to remain with Hendrik day after day, waiting for something to happen.

And always the patter of Hendrik, telling us about Die Mauer, about the twisted psychology of Berliners, of the unfolding of life and of self-understanding. Driving through the streets of Berlin, Hendrik would proclaim apropos of nothing and everything, “All ist gut, All ist klaar.” And always referring to himself in third person, Hendrik, he said, would take care of everything.

Over the days his story unwound. How his father had been part of the SS and had been a Reich officer. Of how as a boy during the war, he was told that his mother had died and he was sent off to live with a relative. He grew up without mother and father. Nazi exultation. The Reich’s collapse. Loneliness. And then as an older boy, a woman appears. She holds him carefully outside his home. People tell him that this is his mother.

But how could this be his mother? She is dead. She died during the war. This is not his mother. He pushes away and runs. The strange horrid woman was a ghost. And if not a ghost, then the adults around him were monsters for telling such a lie.

How had a war neutered a generation from it’s past? Who was Hendrik’s family and what deeds and lies had they all perpetrated, he would ask.

One afternoon sitting in Hendrik’s flat, the golden midsummer’s light casts his sharp features and white mane of hair in profile. He listens to Mozart’s Requiem.  Turning the volume to full, he drains a glass of white wine, head tilted back. All ist gut, Hendrik  says, eyes shut. All ist klaar.