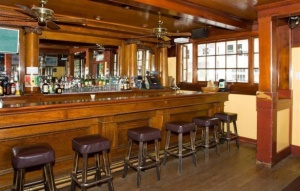 Where did all those marooned sailors ever find ink or a smudge of grease pencil let alone a stoppered bottle?  And how did they provision themselves?

For me, it was relatively easy.  I was living in Smiley’s Schooner Saloon, a bar on the other side of the Stinson slough that greets each foggy morning at 7 am with a fresh pot of coffee.  They have good wifi to boot which means I could toss bottle after bottle of raven writing into the sea until eventually a passing ship would find me.

The first puff of smoke came late one night in the shape of a Facebook message.  It was from Brett Baer.  Where was I living, he asked? It sounded like Northern California.  He had just moved to Bolinas from Texas, he said.

You need to work kind of hard to get to Bolinas.  But there Brett was, most likely within relative sight of where I then sat.

I guess it made sense. And the fact that it does leads to the story of Brett and the story of the Craftsman Buffet.