Why and how did Petaluma become the chicken capital of the world?

Kind of a weird question, but not that weird because it explains how we came to have a chicken barn on our property.

In the 1870’s the town of Petaluma 20 miles to the south of us was in economic decline.  Situated on a slough that eventually empties out into the San Pablo reach of San Francisco Bay, Petaluma and the North Bay had become a tidal eddy catching all the miners and recent emigrants washing up from the gold fields.  Some of them tried a hand at farming (grain, potatoes), and some livestock, but nothing took.

And then came Lyman Byce, a medical student and part time tinkerer from Canada, who as a boy had been intrigued in how his father had increased chick production by keeping eggs warm near the manure pile.  When he moved to the Bay Area in the 1870’s he found himself at the intersection of two interesting problems.  First, there were not enough fresh eggs to feed San Francisco.  At the time, the bulk of eggs consumed in the city were shipped in un-iced barrels from the east coast, sometimes traveling upwards of 4-6 weeks before being  consumed by some unlucky San Franciscan.

And secondly, hens get broody after their eggs hatch – they stop laying and are basically out of commission while raising chicks.  That is, until Lyman came along.  At the 1879 Sonoma-Marin fair he unveiled the first commercial egg incubator which allowed would-be chicken farmers to hatch large numbers of chicks without taking their hens out of production.

The first commercial hatchery soon opened in Twin Rocks just outside of Petaluma and by the turn of the century egg houses and chicken operations were popping up all over Sonoma county.  The fresh air, loamy soil, easy access to port (shipping was still a key line of transport) and freight lines allowed North Bay eggs to make their way across the country.  A massive civic boosterism campaign at the turn of the century proclaimed Petaluma the “Chicken Capital of the World.”  Regardless of whether it was myth or in fact, the North Bay became a locus for egg production in the United States, largely because Lyman Byce had chosen to settle there.

By 1917, Petaluma eggs were feeding WWI armies with nearly 20 million eggs shipped around the country.  With only 7000 inhabitants in the county, the area sported over 2000 chicken farms that reached peak production at the end of WWII.  Although the scale was large by historical standards, it was nothing compared to what was to come. 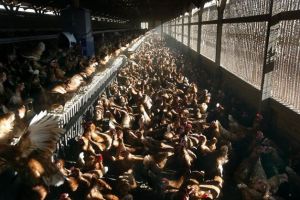 By the mid-1940’s commercial egg production shifted to industrial egg production as farmers drove in ever greater efficiencies.  Non-laying hens were culled, selective breeding introduced, and open-walled chicken houses allowed for maintenance of large numbers of chickens.  Vitamin fortified feeds and vaccinations led to greater productivity.  Eventually hens were housed in suspended cages under artificial lights to stimulate egg production, and would spend their lives in tight cubicles of 3/4 inch wire.   Indoor chicken operations could now exist anywhere, and the interstate meant that you didn’t need to be on a river or railway to ship all over the country.

Industrialization sounded the death knell for the small scale chicken farmer. They couldn’t afford the new expensive equipment.  And their kids wanted to get off the farm. 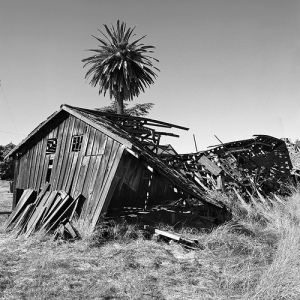 By the 1980’s there were only 300 chicken farmers left in the county. Long low roofed chicken houses everywhere were now collapsing into the ground, kept around mainly for tax reasons. To tear them down would constitute an improvement.