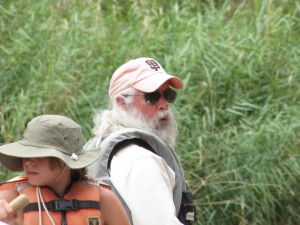 Humble as he is, Howie Usher stands shaggy and tall among the sons of Sinbad.

In Mesoamerican stories, sky and sun energy embodied in the eagle sought union with the water world.  The water world is the subterranean world, the unconscious and amniotic world, – the deepest diluvian recesses from which we come.  According to the stories, the Mesoamerican people would settle in that place where the eagle seized the snake in his beak.  The eagle was eventually seen on a small island in Lake Texcoco and it was there that the great city Tenochtilan (that would one day become Mexico City) was built.

The procreative seized the generative and that’s how life came to be born.  It’s an important story that finds expression throughout Latin America:  in the serpents that guard the base of the temples in central America, in the Hopi snake dance, and even in the image of Popocatépetl and Iztaccihuatl that can be seen in practically every taqueria on the West Coast.

Some of those people from Middle America continued on, possibly following the Colorado river up into North America and the Southwest.  In Hopi stories the first person to follow the river back down to the Sea of Cortez came from Tokonave

near Rainbow Bridge National Monument.  On his return he brought water knowledge and the snake people with him.

Howie Usher has spent his life riding the back of that serpent.  He’s served as one of the guides for Hopi elders, descendants of the people who emerged from there.  He knows the Canyon and the River nearly as well as anybody who comes from that place.

He knows you don’t tread lightly when you enter.  He’s in that canyon again now, deeper than ever before.  He’s still conscious, I hope.  I imagine him at the bottom of a deep pit, trying to sense the glimmer of light that will indicate which way is up.  I imagine he’s beat and hurt and tired.  He’s trying hard to find his way up. We gaze down, hardly shimmers on the surface of the water.  He’s a brother and he badly needs help.   He carried my own daughter through Lava.  I owe it to him.  If you’re near, it’s occasion to reach down hard.  And if you’re far it’s occasion for prayer.

If you can, reach for him.

5 thoughts on “13. The Story of the Boatman and the Serpent”