The end of one story.  The beginning of another.

On the first day of the new year, Anna and I awoke before dawn and took Poe’s remains to Bolinas.  We drove through the Sonoma and Marin darkness, past the unseen dairy and cattle hills, toward and eventually into the San Andreas fault zone.  As the sky lightened we dropped into the narrow crack that separates the North American Plate from the Pacific Plate and we crossed over to that new continent that moment by moment is shedding itself northward and away from our world.

We left Poe at the maritime shrine on the main street along with a photograph of his younger self.  Afterwards we ran on the rocky beach against the roar of the receding surf, watching the flyovers of the resident ravens and hawks.

We left Bolinas later that morning.  Driving out of town, I looked to my right.  An open meadow.  And across stretched a line of 22 fenceposts.  And on each sat a solitary raven, all warily eyeing the world.  Eyeing perhaps even our own departure. 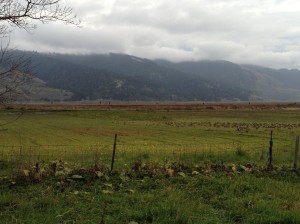