Poe ensconced with a wildlife rehabilitator in Flagstaff. And Mazie and I are camped out in Sonoma California, trying to piece together a new life out here for our family.

We’ve found house to buy. It’s big and green and old and wonderful. But after eight years at Hopi, it’s hard to imagine a life as wild and wonderful and full of serendipity as the one we now have. Is this it? After decades of wandering, are we now settling down? Where’s the adventure in it?

On a Tuesday morning, sitting in the courtyard outside the Sebastopol Inn, I call our friends Kerry and Kristina back home. I’m worried, I tell them. How are we going to make a new life for ourselves out here?

Kristina’s answer is simple. This thing that we need to do is too big, she says. We can’t do it alone. So we need to put it out there, we need to seek out our allies and be available when they present themselves.

As for Kerry, he points out that when driving into Walpi Housing in the middle of a barren desert, would we have ever imagined that it was an ideal spot for building large wooden structures, and butchering a cow, and raising a mess of ravens? Could we have even conceived of the adventures that awaited us there?

Two hours later, Mazie and I sit in the Holy Cow coffee shop in Sebastopol. I’m despairing. Will I be able to talk to the ravens in our new home? I ask Mazie.

Daad, she says, and rolls her eyes in a way to indicate that once again I’m proving myself an embarrassment.

On the wall behind her hangs a large painting of a young girl cradling a crow. And further down, another canvas of an enormous raven perched on the body of a baby. I step up to take a picture of it and an older woman sitting at a nearby table asks if I’m interested in ravens.

She’s read all about them, she says.

Heinrich is amazing, she says and we high five.

I tell her the story of the wash ravens and she tells me about herself. Her name is Maryann Markus. She used to teach, but she’s retired and she’s built herself a studio and she spends much of her time drawing nests. She is fascinated by ravens, she considers them her totems. There’s something I’ve never shown anybody, she says removing a velvet pouch from her purse. Inside, a hematite figurine of a raven. I squeeze it in my hand and rub it and squeeze it again. It’s heavy and has the dense sensibility of a low rumbling current.

She looks at me. It’s yours now, she says. They’re such powerful birds, guardians really. She asks if I’ve met Michael, the owner of the coffee shop and to fellow who did the paintings. She leads me to the back to introduce us.

He’s my age more or less, introspective and gentle seeming. Michael, too, says he can’t get his mind off these birds. He’s been fixated on them a while and keeps working them, making image after image. They’re deep, intense creatures, he says, and we’re afraid to let them into our lives. He says that the image of the baby and the bird scared people, but that they misinterpreted it. I see him as a protector, he says.

I tell him about the raven in our care and how our neighbor killed and maimed two of them. How I was fed up and in a weird way it was a last straw for us. I just wanted to get out of there.

But that’s all part of it, too, he says. You can’t run from that either. He says he hopes our move here works out well and that things take a good turn with the house. Before I leave, he gives me a hug.

I walk out of his office and see one more canvas. 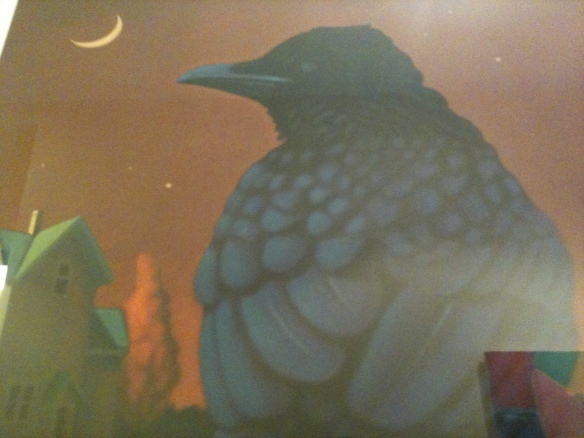