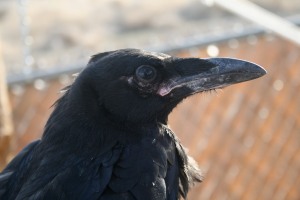 My problem with our species?

For all our gloating about our big brains, we still are largely only able to comprehend two states of being at once.  Good and bad.  Black and white. God and the Devil.  Republicans and Democrats. And then we often try (very hard) to reduce them to only one.  That’s about all we can handle.

Like good sound recordings though, the the universe is not binary, but analog.  There exists a whole range of states, meanings, perspectives – a vast heterogeneity of experience.  How could we possibly distill something to being solely good?  Or solely bad?  How about something in between and open ended, something like…”interesting”?

So what brings me to this?  Ravens, of course.

Yesterday morning, Kerry and I together went through the wash routine with the birds, now down to three (or really just two and a half).  I swaddled Poe (we’ve now identified Broken Wing as him, partly due to his consistent aloofness from the other two, his blazingly independent cross-desert walks, and his consistent backward twisting of his head when we feed him), and we led the other two across the desert to the trees in the wash.  Once there, we all settled down in the shade:  the ravens to play, Kerry and I to talk.

What a wonderful gift to observe these creatures at such close range.  And how sad that many of our neighbors continue to miss the opportunity, just because they’ve chosen to label them a nuisance.  Even more ironic, we’re pretty certain that one of them is (intentionally or unintentionally) responsible for killing one bird and injuring the other.  Without his engagement, we’d now have four ravens flying freely out in the desert essentially minding their own business.  Instead, Broken Wing Poe still depends on us for feeding and the others routinely come back to hang and visit with him.

We all had some nice doings out in the wash, though.  Never and More played tug of war with sticks and grasses.  More found some meat scraps and tried several times to cache it in the sand.  We observed More, as always far more quick on the wing and the first to grab stinkbugs and treats when he spies them.

We watched the birds hunt insects.  At close range, you can also see their eyes can be directed forward and hence may be capable of stereoscopic vision (a hallmark of predators).  Which suggest that these guys may not be just scavangers and feeders of carrion. They may be able to hunt lizards and small animals, putting them in the same hallowed space as eagles and hawks.

Poe, meanwhile, hung in the shade, tested his wings, knelt in a cooling position, and sometimes talked.

And in all, very, very interesting.