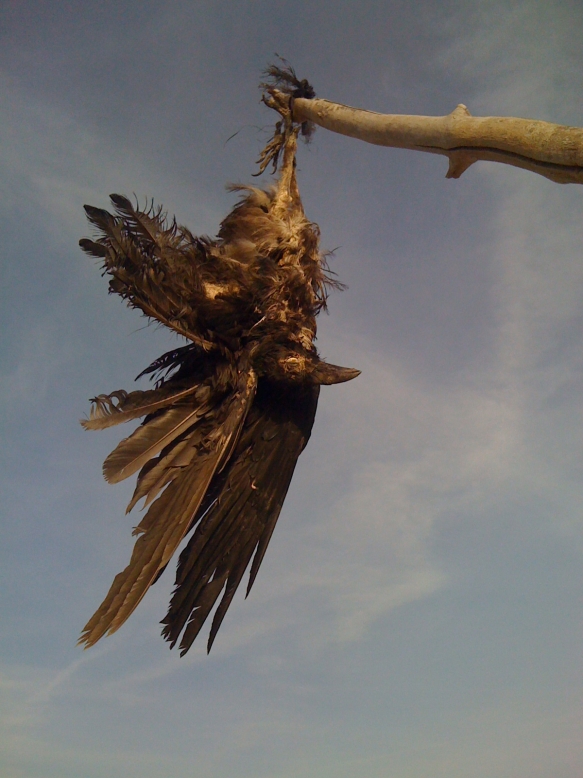 I think I’ve had it.  Forget this abortion we call civilization.

A few days ago our house sitter called all in a panic.  The vibe in the neighborhood was getting bad, she said.  The neighbor was upset because the birds were going to get his corn.  And they were loud.  Another was upset because they were flying to his house and shitting in his yard.  Another complained that one of the birds was calling outside her son’s window in a threatening way.

They care for one another.  They don’t sell meth. They don’t kill their spouses or their young.  They don’t watch TV.  How many ways can I count my love for thee?

The following evening our neighbor returned one of the ravens to us.  It was threatening his corn, he said.  Never mind that his corn is only a couple inches high and that the birds don’t yet feed themselves.

The bird was injured.  He wouldn’t take food and he couldn’t move his wings.  By the next morning he was dead.  Our house sitter buried him in the desert.

Every Hopi who’s heard of our raven adventure has expressed aversion.  Not just surprise, but something close to downright disgust.  They’re ugly black birds.  And they eat the corn.  I might as well tell folks that I’m raising rats.

Last fall I found a bag of shotgun shells and a bottle of soda beneath the wash nest.  A farmer had perched on the bank and set to taking pot shots at the infants.  In talking to farmers here, they here don’t distinguish between the young and the adults.  They don’t even distinguish between the ravens and the crows.  How can they set to killing them?

A farmer once told me that he crucified the “crows” in his field because, he said, “Crows are like Navajo. They’re afraid of their own dead.”

Funny.  True on some counts, but not on others.  First off, the things hanging in his field are ravens and not crows.  Secondly, I’m sure the ravens can recognize their dead.  And they probably know to steer clear.  But isn’t that a sign of a higher intelligence?  And shouldn’t intelligence of any sort be respected?  And then there’s the likening to Navajos. In contemporary Hopi culture, they’re seen as raiders and thieves.  I can’t speak for the Navajo, but the ravens out there are as much a part of the ecosystem.  And though Hopi trump all other human occupation on the plateau,  the ravens were here long before the Hopi.

But in some ways I get it.  Crucify the bird.  Set an example.  But do it with prudence.  And attention.  And thoughtful care.

I transplanted vegetable starts last week.  Within an hour the chickens had decimated them.  Chickens and children willfully trample our gardens.  But our first instinct isn’t to haphazardly kill them and hang them in a corn field.

And christ, if you’re going to kill it, at least know whom it is you’re killing.  Know it by it’s name.

No.  Our first option should be to figure it out.  In the garden incident, I erected a small chicken wire barrier around the vegetables.  In another, I might discuss the matter with the child.

Isn’t it our responsibility to protect without killing?  If not, what are we then, but beasts? 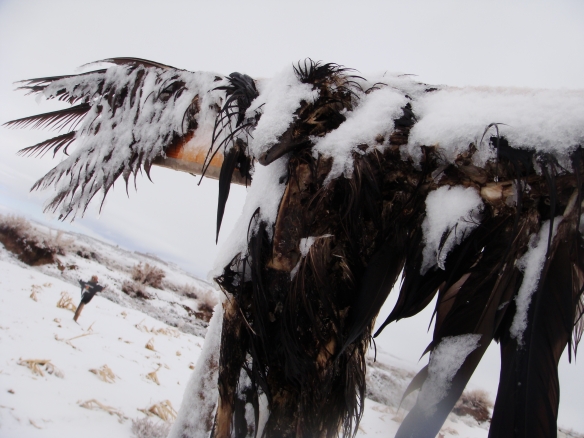