For those that have been following the saga, I’m providing Kerry’s notes, straight from the horse’s mouth.  If anything, they suggest the richness and nuances of the relationships, interspecies and otherwise.  Hurray for Kerry:

Big doin’s in the wash. When I took them down there, they got separated (because More freaked out a bit and got out of the cage) and were too skittish to recapture. So, I put the more timid of the two in the nest box which was about 150 yards away from where More was hiding in the sagebrush. I was pretty concerned about them finding each other, so a few hours later I went back down.

They were each exactly where I’d left them. I used water to coax Never(?) down out of the nest which he came to immediately. He seemed very affectionate, so I started squawking to him and walking towards More, and sure enough he followed– and meanwhile More was interested enough to fly and walk a bit closer, down into the cornfield.

My squawking brought two mature birds almost instantly; they did some real close flyovers.  Finally the two babies spotted each other– and I’ll tell you, it was quite touching to see them figure it out and hop together for a nuzzling. Palpable relief on all parts, myself included.

Then I walked back to the nest. Never followed along, and More did too at a safe distance. When we got back Never drank some more, and More almost dared to. When I gave Never some elk scraps and he went into full open-mouth-begging calls, More broke down and came over for his share too. So– they’re fed, watered, and both know where the nest box is, and they’re together (at least when I left them).

Lola and I sneaked away and they went off to explore the wash. Parents stayed in sight at all times– fingers crossed that they’ll adopt, rather than attack. Never even pecked and ate a bug at one point. If Broken Wing is still looking chipper tomorrow, I’ll take him down along with their breakfast. More heart-rending photos expected then. Enjoy these! A memorable Father’s Day, in its way. 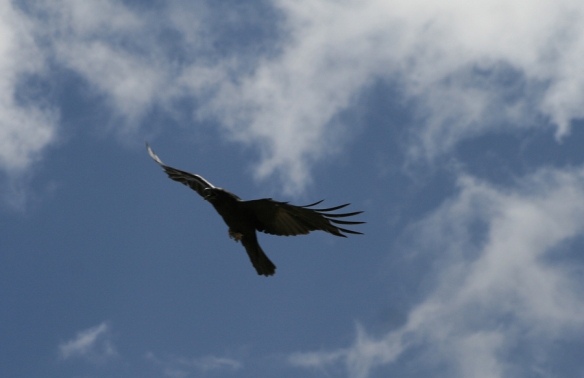